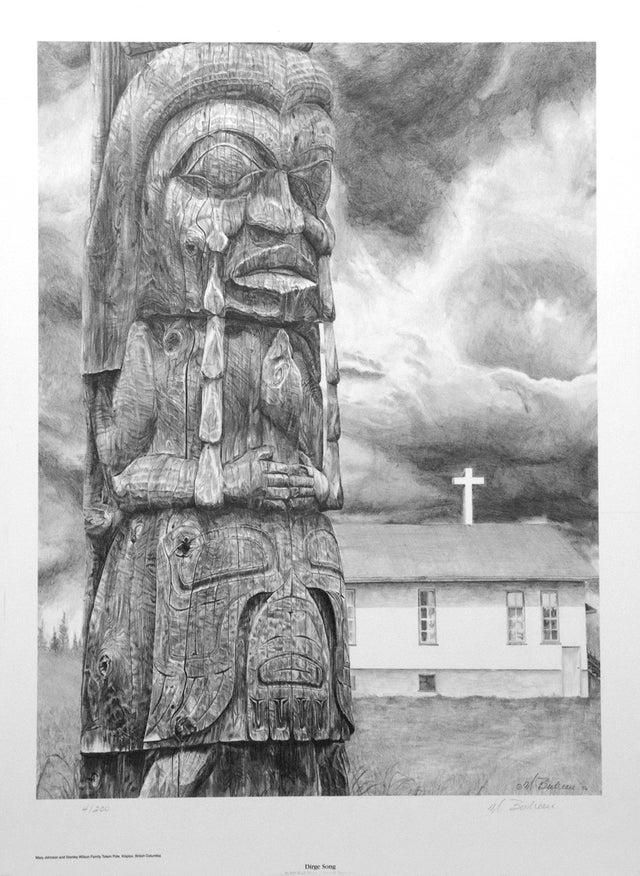 In 1994 I travelled to Gitskan territory in Northern BC to meet and draw a portrait of Chief Walter Harris for an art show, Circle of Inspiration at the Gallery of Tribal Art in Vancouver.

While in the village of Kispiox, I visited the totems that stood in front of houses no longer there. Children were running around the totems unaware of the atrocities the church had invoked upon their ancestors. The irony was not lost on me.

The weeping pole and it's juxtaposition to the church seen in the drawing is not fabricated, that is how it was when I was there.

At that time in my life, I was new to BC and learning about Colonialism, its purpose and effect upon Native people, and I felt raw and deeply ashamed. I was searching for ways to communicate through art that these acts were so very wrong. I felt compelled to find a way to let "The People" know someone got it, someone empathized.

In Dirge Song: the 'frozen' tears on the totem were the ongoing flow of tears of The People caused by the 'innocent' little white church. The sky is in turmoil because the spirit

of The People is in turmoil and on the lower left hand side a little bit of light appears on the horizon - a hope for the future that apology, responsibility, and respect would one day come to a culture that lived harmoniously with the earth.

A dirge is a song of mourning.

I returned to Vancouver, printed my photos and knew I wanted to making this drawing. I

found out who owned the weeping totem and returned to Kispiox to meet and ask for that permission in person from elder, Mary Johnson.

We met in that church and she told me the meaning of the figures on the totem and the woman clutching the grouse. The tears on the pole fall in thanks for food (the grouse) and a flood that caused starvation and killed their people.

The drawing was made with permission of the Mary Johnson and Stanley Wilson Family.

The original drawing was purchased long ago.

200 lithographed prints were made plus art cards.